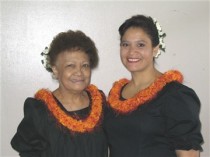 Auntie Linda Pi’ilani Danek, learned many years ago from her Kumu Auntie Helen Kekua Waia’u that the beginnings of the hula are the “essence” of our people. It was from this disciplined foundation that Auntie Linda drew her inspiration and began Hula Hālau ‘O Pi’ilani.

Beginning in 1964, Auntie Linda began informally teaching from her home in San Francisco. During this time Auntie formed Ha’aheo Na Wahine with Billie Billamor and Aloha Oe Bayne. This trio would go on to serve as musicians for many of the Hālau in the Bay Area throughout the 70’s.

Moving the Hālau to Santa Clara, CA, Auntie felt the time had come to usher in the next generation of teaching with the Uniki (graduation) of her daughter Tonilynne Kanani Densing from Alaka’I to Kumu Hula. Since opening the Hālau in 1981, they have entered their groups in numerous competitions in Hawai’i, Seattle, Las Vegas, Utah and of course, right here in California.

Kanani and Auntie Linda have always insisted on maintaining a family atmosphere, as evidenced by the many lifelong friendships that have spawned from being in the Hālau. It is through this closeness and common bond with their haumana (students) that they both hope to perpetuate the Hawaiian culture through song, language and dance.

Kanani first began hula at the age of 3 yrs old learning Noho Hula (sitting hula) with her mother and attended all hula functions until she began her fomal training at age 12 under Auntie Naomi Kalama and later under Auntie Ehulani Lum who gave Kanani the title of Alaka'i along with Ehu's daughters Deanie and Allenette.  Her skills were perfected during this time which also included taking specialized workshops wtih notable and highly respected Masters of Hula like Uncle Johnny Lum Ho, John Kaimikaua, Auntie Kau'i and Noenoe Zutemeister and Tiare Clifford.  It is through all this training and lifelong experiences that Kanani draws her skills, inspiration and creativity to share with her haumana to have them love the Hula as much as she does.  She later began a deeper, more intensive training with her mother, the late Auntie Linda, who passed away in 2009.

Kumu Kanani has continued her mother's legacy and has begun her own journey.  She has performed for many local private birthday parties, weddings and public functions including the Ho'olaule'a Festival and Ia Oe E Ka La Hula Competition at the Alameda Fairgrounds in Pleasanton.  With invitations to join other festivals and competitions both local and out of state.  She has gained a well-respected recognition for her Aloha, leadership and her creativity with her Hula.  She enjoys meeting people and always welcomes all with a big smile and a warm hug!  She looks forward to meeting you! 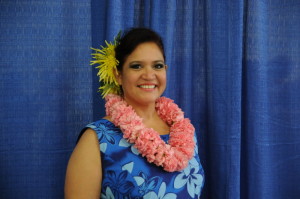 How to Find Us

Email Kumu at Hulapwr@gmail.com for the link and password!